The sun is out!

There's no better time to join us.

Kingswear Rowing Club was formed in 2002 when some 30 people met in the Ship Inn, Kingswear and agreed to form a rowing club. They committed sufficient funds in terms of loans and donations to purchase one Seine Boat. Since that time the club has grown to some 100 members ( aged from 9 to 70 years old ) who come from all walks of life.

We now own two Seine Boats, three Pair-Oared boats – one of which is identical to the Dartmouth Regatta ‘Blue Boats’ – and a small powered boat. We also have two Concept II Ergometers kept in a training area in Kingswear Village Hall, as well as a boathouse and pontoon in Waterhead Creek.

We used to have an active  Junior Section (under 18′s and under 16′s) and worked with Kingswear Community Primary School and local youngsters coaching children from 9 years old in Waterhead Creek.  One former Junior rower from Kingswear RC is Bill Lucas (shown below) who was under 23 World Champion and earned a place on the GB rowing squad. Our juniors often raced and won at Dartmouth Regatta. WE ARE CURRENTLY LOOKING FOR ENTHUSIASTIC ADULTS WHO WOULD LIKE TO BECOME INVOLVED IN RUNNING JUNIOR ROWING.

We have a fully developed training and safety programme for coxes, to ensure our boats are properly and safely used on the water. One or two of our boats are moored on ‘walk on’ pontoons in Kingswear and the others on our (tidal) pontoon in Waterhead Creek. We use a simple online booking system which can be found on the “On the Water” page to ensure everyone can get out for a row.

In November 2014 we published a members questionnaire on members rowing interests. Over 24% of our members responded and provided some very useful feedback. Thanks to all members who completed a questionnaire and returned it to us. Much of the feedback has been translated into our future rowing plans.

All other club rules apply as normal. 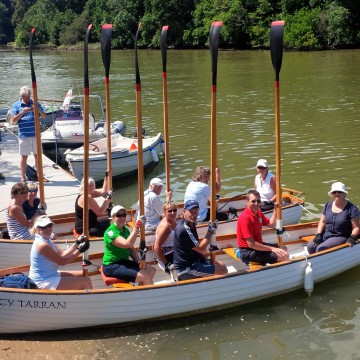